Automation testing is becoming important as manual testing cannot keep up with today’s fast changing systems and applications. Slow and manual test data provisioning can create further bottlenecks and test failures. Therefore, most organizations use automation testing techniques to match the speed of iterative delivery, reduce the risk and test complex systems rigorously before each release.

Automation testing saves employees a great amount of time in detecting implementation failures, carrying out behavioral tests, etc. On top of that it is quick and reliable when compared to manual testing. As a result, one such well-known and highly effective infrastructure (like Robot Framework) is at the forefront of open source test automation technologies.

An Introduction to the Robot Framework

Robot framework is an open source service that enables users to automate test cases using keyword driven development. It consists of pre-defined keywords and also allows the creation of new keywords. Hence, the combination of these two can let the testers automate anything!

Keyword-driven testing has gradually gained popularity in automation test development because its primary goal is to create functions that consist of a set of steps to complete action(s) in performing a test case regardless of the test framework used.

The framework has a collection of standard test libraries and, with adding test libraries in Python or Java, the robot framework becomes extensible to achieve various kinds of test coverage scenarios.

The key feature of the Robot Framework that makes it stand out from other automation tools is that it is an open-source tool, making it fit into the budget and the tester requires very little programming knowledge to get started with it.

The framework can be customized to incorporate different test scenarios. The code mainly consists of keywords that are functions that are written in readable form so it’s easy to understand for any new person, revealing the intention of the function. Hence, training new resources for automation is not an issue here as it has a very low threshold requirement for coding.

The Robot Framework delivers 3 types of reports to illustrate the test results.

The reports are descriptive and easy to understand and can be shared with stakeholders directly.

The tool can be used to automate web, mobile, and desktop applications. The automation can be done for GUI and functional testing as well as API testing. It is compatible with multiple operating systems like Windows, Linux, Unix, and MAcOS , as well as Android and iPhone. Hence, resolving scalability issues.

The Robot Framework helps to classify test case execution with the help of the tagging feature. There are instances where we want to execute selective test scenarios to run. This can be priority wise, for example, we want to execute a sanity test suite only or feature wise. Tagging enables testers to add tag names to individual test cases for selective execution choices. Hence, reducing the redundancy of the same test cases maintained separately.

Unlike other open source automation tools, Robot Framework supports compatibility with multiple languages, including Java and Python. File structuring is easier and log maintenance is done in a detailed manner. Adding SeleniumLibrary enables its extension to cover automation of web-based applications.

The Robot Framework also offers API test automation with the importing of JSON and Request Python libraries. It supports automation of windows-based desktop applications, which is mostly not featured with other open source automation tools.

The Robot Framework allows CI/CD for customized report generation with the integration of git with Jenkins. Overall, it comprises major checks that project stakeholders require for their automation work.

Robot Framework is independent of any kind of platform, hence giving testers full versatility to explore and design its framework.

Basically, the test data gets passed into the framework, after which the data is communicated to the system under test with the use of in-house and external libraries.

For instance, SeleniumLibrary is used for web testing, which internally uses the Selenium framework for all the main task lifting. The Robot Framework acts as a wrapper for the Selenium feature in keywords that are ready to use.

A similar example can be used for API testing, Robot Framework uses JSON and Requests libraries and test cases inherit the required keywords with or without a combination of additional Python code to achieve the test execution goal. 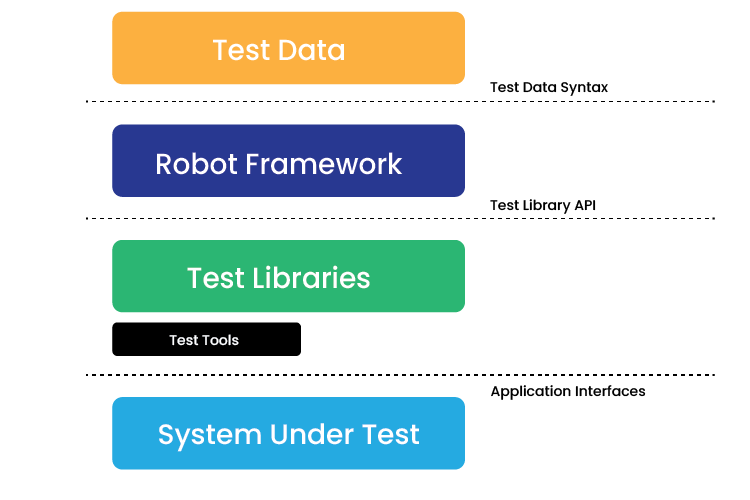 The Test Libraries perform the task of interaction between various layers and make it feasible to import and maintain the same. Finally comes the System Under Test which is the main target and that executes the test activities.

Our team of quality engineering experts use Robot Framework tools for automation test execution of IoT-based, web-based, and mobile-based applications. With the help of Robot Framework, the automation test coverage on average per project goes around 60–70 percent. Hence, it not only speeds up the process of quality testing but also enables testers to focus on areas that require manual attention, giving an opportunity for an even testing process.

The Robot Framework helps in regular execution of test suites comprising more than 300–1000 test cases for projects having multiple builds in a week.

The VOLANSYS team is automating test cases with cross-browser and cross-platform (Linux, Windows, and Mac). In many projects, the setup is also run by the on-site development or client team, Robot Framework has an easy-to-use setup that can be easily done by the end-team with a simple demo session.

Robot Framework is gaining popularity in today’s fast-pacing agile workflows. It not only provides budget-friendly but also unlimited access to various features that can cover the test execution. From ramping up the resources to parallel execution on different platforms, the Robot Framework becomes an apt choice for the current generation of testers. To know more, read our QA Automation Services success stories.

About the Author: Varnit Chakravarti

ONE OF THE FOLLOWING

Importance of Continuous Testing in the DevOps cycle